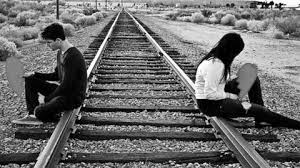 Well, February is the month of love, Valentine’s day has just gone by a lot of celebration, a lot of gifts, but some of us are probably still sitting, sulking, having remorse feeling about the break ups, or the relationships which did not work.  Well I’m not here only to talk about the romantic relationships, but it can be any relationship for that matter and if you are one of those who are struggling and thinking how to deal with that unfinished emotional baggage which is continuously troubling you then, probably this talk is just for you.

Relationship is something very amazing you know how biryani is made with rice if it is a chicken briyani, chicken and almost the same spices, but yet different people have different taste and so is the relationship so there is no standard formula which one can say will only make a relationship a good relationship so i think today we are here to talk about what kind of challenges people face, and how do we deal with it? When one goes through a breakup it is a painful relationship it can be very toxic, unhealthy that somebody is being beaten up or emotionally been tortured in a relationship but you still get glued on to it because you don’t want to experience that pain or you think that the pain of breakup is even bigger than being in a relationship, and you keep delaying your decision.

A relationship could be of a business relationship there was a client who talked about that she really worked on one of her stuff, like trained her and emotionally got involved but after that, the person started behaving very strange and she literally felt being dumped. Not only a romantic relationship but, any relationship with things aren’t going good, what should you be doing and how should you deal with it. Well there are three steps which i think people talk about, every person is different, the thoughts are different, the styles of dealing are different, so is there a standard formula? I will say yes, there is a standard formula which works with everyone.

So first thing is it every toxic relationship or unhealthy relationship will make you feel sad and even angry at time because you feel cheated because a lot of women have actually mentioned that they feel it’s a total loss of emotional investment, which they did.

in the other person, whichever the relationship was and this relationship bring in a upset feeling so you are kind of stuck up your angry and your sad what happens when you are sad?

You  know your shoulders drop down, chest goes inside but, when you are angry, what happens, your shoulder goes back, chest comes up and if both the things are happening together. Just imagine you’re struck up, you can’t go forward, not backward, and you don’t really know what is happening to you and that is what happens in a breakup.

You’re angry about many things at the same time you’re feeling and element of loss and your very sad about certain things. Whatever the relationship is, it is very important that we define that what it is so we need to define and spell out to ourselves.

What is this feeling? How do i feel? Why do i feel that, and then face it. You can’t run away with it. So a lot of people tried doing that and it just doesn’t work but if you have any negative emotion which is attacking you then, you need to deal with it, you need to face it and deal with it and that is what is a process of systematic desensitization. So when you think about it, it really leaves you in a very painful state and then you keep saying ‘I don’t want to think about it’, ‘I just don’t want to think about it’, but you keep thinking about it and you do nothing about it. So i think facing it and then slowly, slowly dealing with it is something which will make you feel better try it don’t run away because running away does not really helps and let me tell you one thing, any relationship, if you have reached the stage of a breakup then it doesn’t only have all good things in it certainly there were stages where they were some toxicity, there were some negative things and when you focus on only good things, which you had and when you focus on only bad things your emotions change. So it is very important for you to define yourself that what is the cause of pain?

Step two, always remember that, don’t just get stuck onto a blaming process. A lot of people say that, I didn’t do this, I was very honest, I was committed, but the other partner, really didn’t come forward and didn’t help me. Please don’t get stuck to the blame game because when you start playing blame game you have an element of self love, you love yourself and you will feel it’s been really unkind, unjust, unhealthy on the other person to do this to you and in turn, you make yourself actually target the whole negativity So, i would very strongly suggest that if you’re going through a break up it is important for you to understand that what do you want and what you don’t want. Let’s just look for positivity that’s going to help us grow into our life.

Step number three is very important, there are two kinds of people rejecters and rejectees. So two people had a good relationship for a number of days, months or years, and then they decided to move on, break up. So, whether you are a rejecter or a rejectee.

Researchers have shown different impact, but researchers have confirmed that both have undergone the feeling of sadness, depression and negative emotion, so even women who are rejectors because they were into a toxic relationship, and they could not take it to a brim when everything had gone too bad, they move out and still feel bad about it. So it’s been your decision to move out of  it, and then you feel bad about it. So let’s understand, you should never get into the process of self blame, self doubt.

Let’s understand that in terms of two things forgive and forget, so they are only three possible ways that you either forgive the person, and you reconcile it and move on.

So come on friends, i know a break up can be very, painful, but who can help you out is you yourself. Eventually you’ve to wait, because it takes time to heal so are the emotional problems it does take time to heal. Time is the biggest healer. Each person is unique you need to deal with your emotions and your feelings and your things within yourself and that is how you heal your wounds.